THE SECURITIES EXCHANGE ACT OF 1934

(Translation of Registrant’s Name Into English)

(Jurisdiction of incorporation or organization)

During the quarter, one route began operation to one international destination at the Group's airports, while one was canceled. The offer of seats increased 2.3% compared to 1Q19. It is worth mentioning that during March and April there were no definitive cancellations of routes, but temporary suspensions in their operation by the airlines.

Total passenger traffic decreased 4.9%. Of total traffic, 85.6% was domestic and 14.4% was international.

The airports with the greatest impact on total passenger traffic due to the reduction of frequencies or suspension of flights are:

OMA implemented 21 commercial initiatives in the quarter. The commercial space occupancy rate in the passenger terminals was 97.0%.

Commercial revenues increased 8.9%. The line items with the largest increases were:

Construction revenuesrepresent the value of improvements to concessioned assets. They are equal toconstruction costs and generate neither a gain nor a loss. Construction revenues and costs are determined based on the advance in the execution of projects in accordance with the airports’ Master Development Programs (MDP), and variations depend on the rate of project execution.

The sum ofcost of airport services and general and administrative expenses (G&A) increased 0.6%, mainly due to higher payroll expenses.

As a result of the foregoing,total operating costs and expenses decreased 0.2%.

Financing Incomewas Ps.289 million, mainly as a result of the foreign exchange gain.

Earnings per share, based on net income of the controlling interest, increased 28.4% to Ps. 2.47; earnings per ADS increased 5.9% to US$0.84. Each ADS represents eight Series B shares.

The most important investment expenditures included:

As of the date of this report, OMA has no financial derivatives exposure.

In the first three months of 2020,cash flows from operating activities decreased 33.0% to Ps.735 million, compared to same period of 2019. This reduction is mainly explained by higher tax payments compared to the first quarter of 2019, as well as the elimination from income of the foreign exchange gain recorded in 1Q20 as it was a non-cash item.

Financing activities generated an outflow of Ps.232 million, mainly due to the repurchase of shares for a total of Ps.150 million, as well as interest payments totaling Ps.81 million.

COVID 19:In the second half of March, Mexican authorities began to implement measures to reduce the spread of COVID-19 through recommendations for social distancing and reduction of non-essential activities. On March 30, the General Health Council declared the disease caused by COVID-19 as a health emergency. The next day, the Ministry of Health issued a decree ordering the suspension of non-essential activities in the country until April 30, which on April 21 was extended until May 30. Under this decree, airports are considered essential activities and have remained in operation.

As a result of the measures implemented by the government to contain COVID-19, operations and the number of passengers at our airports have had a significant reduction. Airlines operating at OMA airports have continued to adjust their operating itineraries downward relative to the second half of March, and an increase in operations is not expected until the declared health emergency ends. From April 1 to 22, 2020, the number of total passengers decreased 92.1%, compared to the same period of the previous year.

As of today, no flight restrictions have been issued by Mexican authorities. If new measures that restrict air operations were enacted, or if the current health emergency measures that have already been implemented in the country, which have restricted economic activity, are extended, there could be a significant additional reduction in passengers at our airports.

Suspension of operations of the Hilton Garden Inn Hotel: As a consequence of the different measures implemented to contain the COVID-19 virus, the operation of OMA hotels has experienced significant decreases. As a consequence, on April 6, 2020, OMA decided to temporarily suspend the services of the Hilton Garden Inn Hotel until at least April 30, 2020, due to a minimum level of occupancy. The hotel is expected to restart operations once the suspension of non-essential activities in Mexico is removed.

In consideration of the various measures taken by the Mexican government to reduce the spread of the COVID-19 virus, on April 16, OMA announces the postponement of the Annual General Ordinary and Extraordinary Shareholders’ Meeting (“the Meeting”), which was programmed to be held on April 22, 2020. The Meeting will be held at 10:00am on the 19th day of June, 2020, in Salón Residencia 5, of the Hyatt Regency Mexico City Hotel, Campos Elíseos 218, Colonia Polanco, Alcaldía Miguel Hidalgo, 11560, Mexico City, Mexico.

Matters previously established and announced to be discussed and voted during the Meeting will not be modified. In addition, and in order to preserve the Company’s liquidity in light of the effects of the COVID-19 pandemic, OMA´s Board of Directors has recommended not to declare a dividend at the Meeting to be held on June 19. 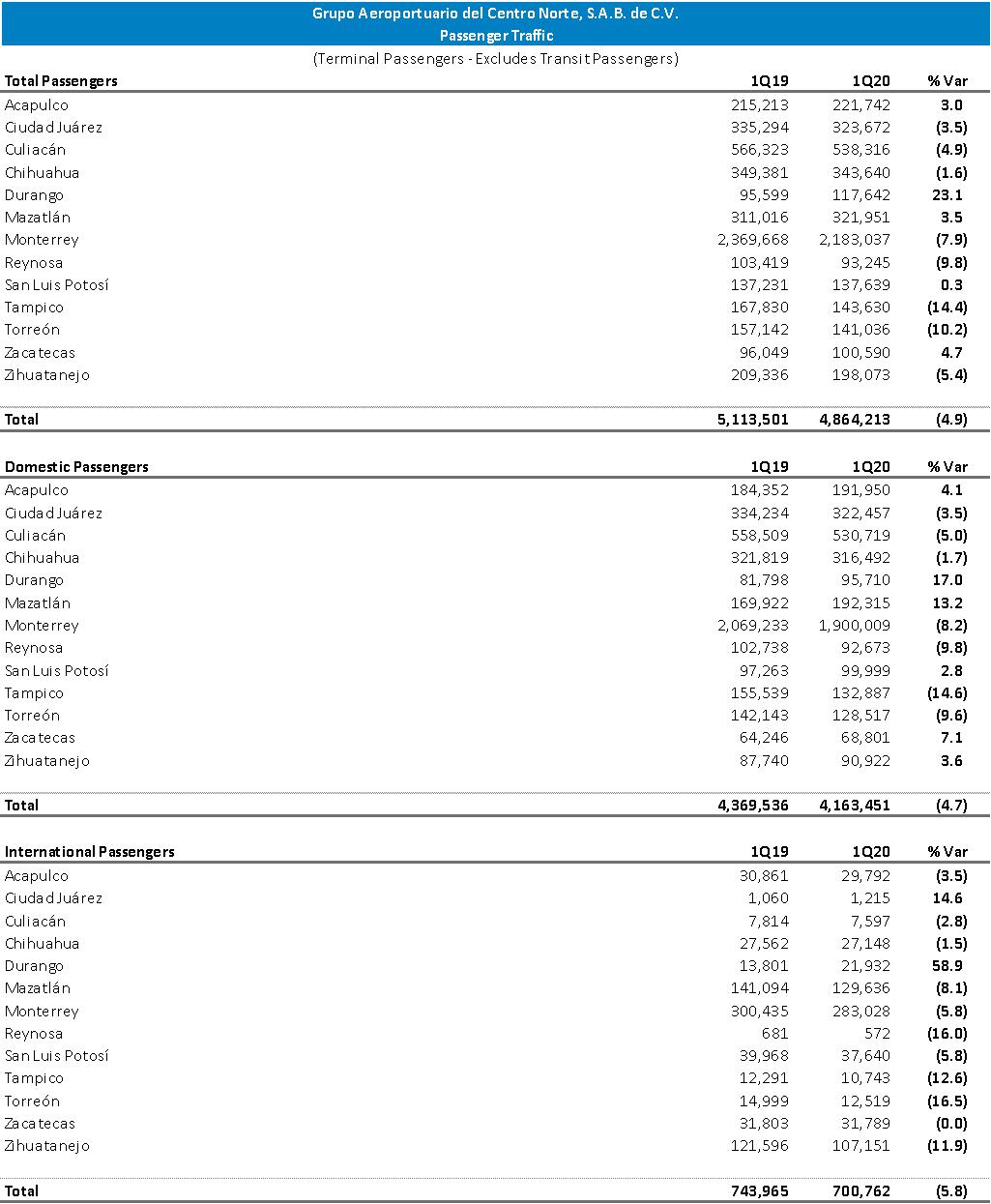 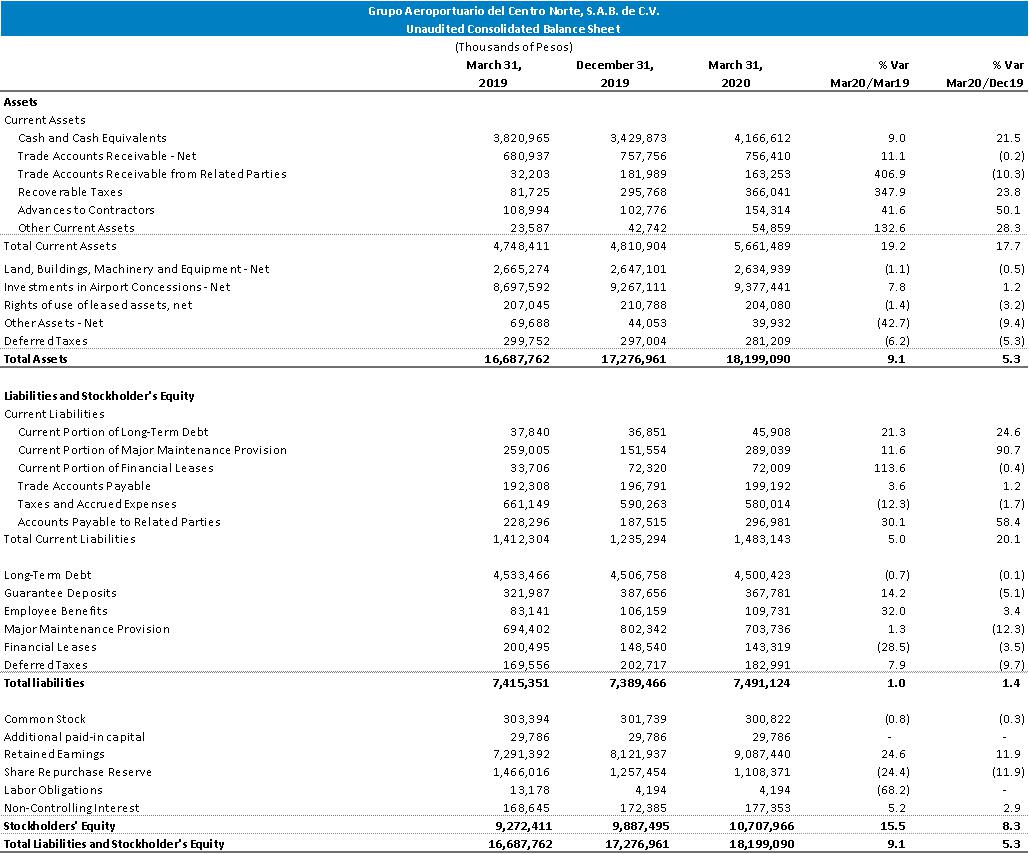 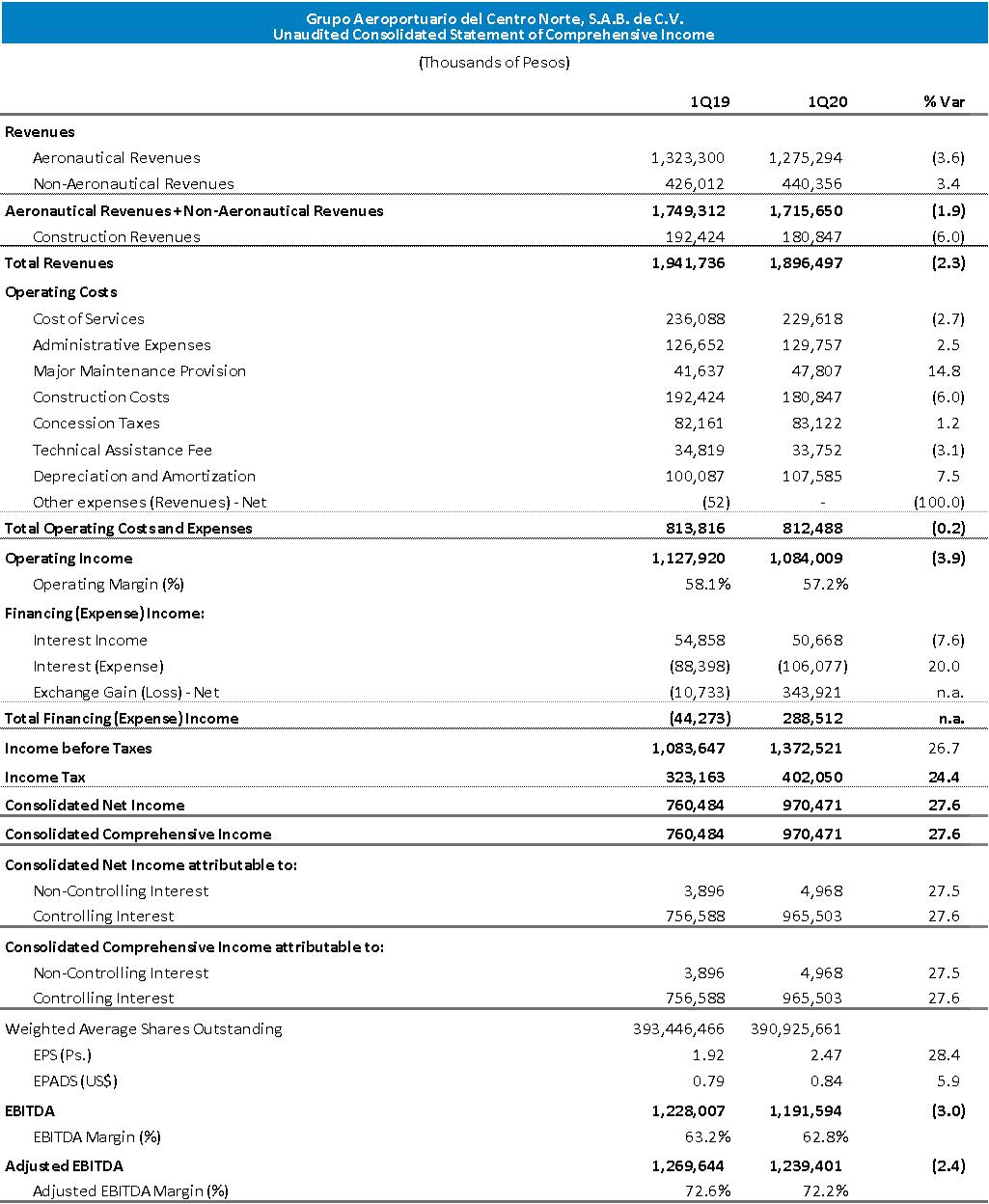 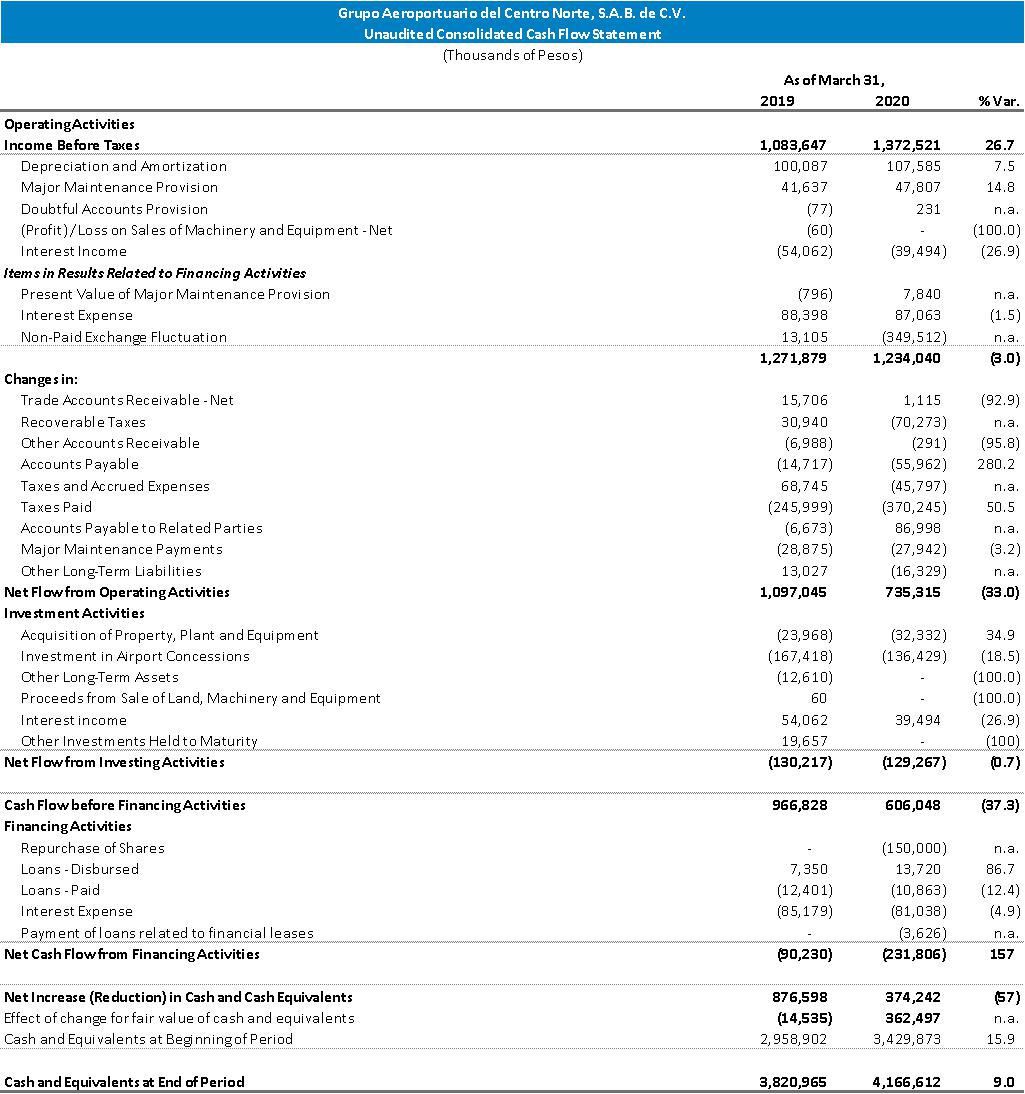 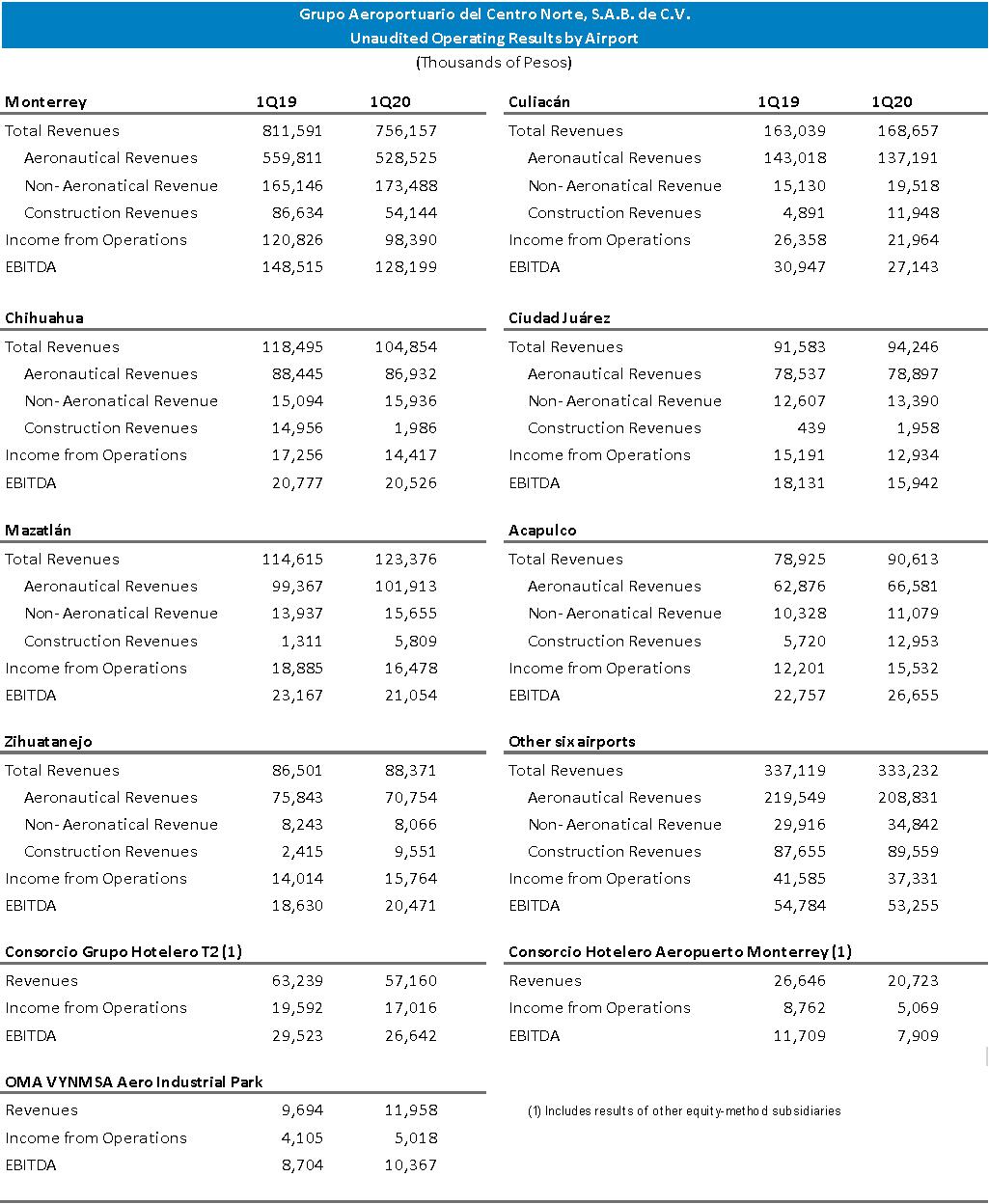 Notes to the Financial Information

Construction revenue, construction cost:IFRIC 12 “Service Concession Arrangements” addresses how service concession operators should account for the obligations they undertake and rights they receive in service concession arrangements. The concession contracts for each of OMA’s airport subsidiaries establishes that the concessionaire is obligated to carry out improvements to the infrastructure transferred in exchange for the rights over the concession granted by the Federal Government. The latter will receive all the assets at the end of the concession period. As a result the concessionaire should recognize, using the percentage of completion method, the revenues and costs associated with the improvements to the concessioned assets. The amount of the revenues and costs so recognized should be the price that the concessionaire pays or would pay in an arm’s length transaction for the execution of the works or the purchase of machinery and equipment, with no profit recognized for the construction or improvement. The application of IFRIC 12 does not affect operating income, net income, or EBITDA, but does affect calculations of margins based on total revenues.

Capital investments:includes investments in fixed assets (including investments in land, machinery, and equipment) and improvements to concessioned properties under the Master Development Plan (MDP) plus strategic investments.

Strategic Investments:Refers only to those capital investments additional to the Master Development Program.

In accordance with the requirements of the Mexican Stock Exchange, the analysts covering OMA are: