For the month of

(Indicate by check mark whether the registrant by furnishing the information contained in this Form is also thereby furnishing information to the Commission pursuant to Rule 12g3-2(b) under the Securities Exchange Act of 1934.) 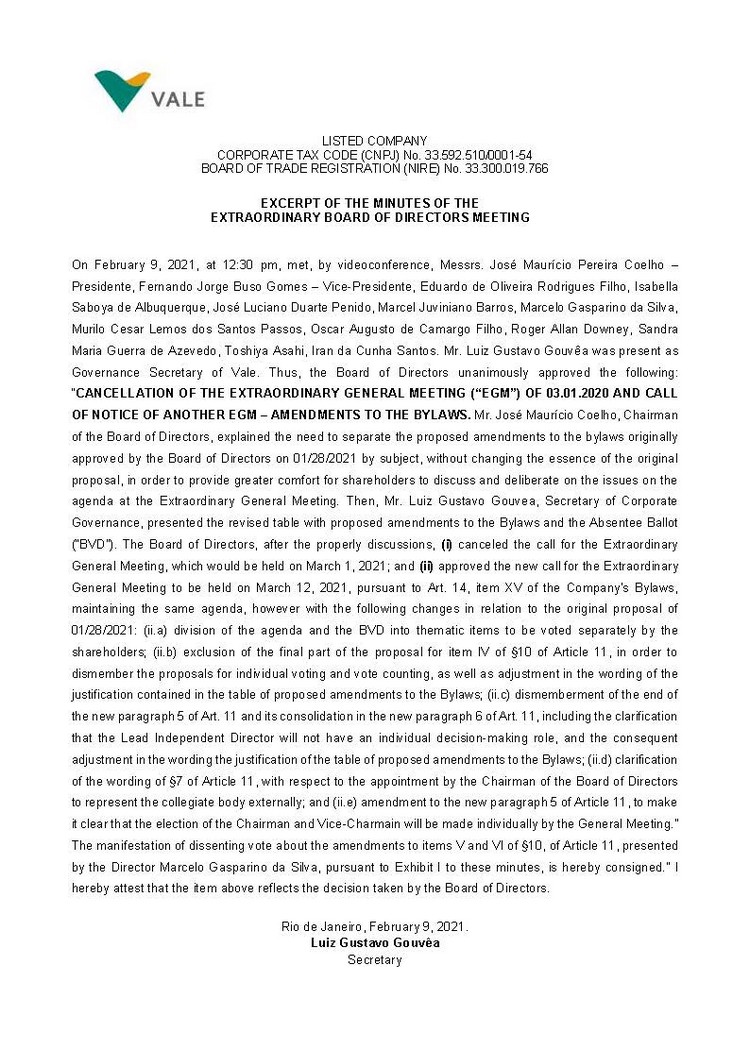 LISTED COMPANY CORPORATE TAX CODE (CNPJ) No. 33.592.510/0001-54 BOARD OF TRADE REGISTRATION (NIRE) No. 33.300.019.766EXCERPT OF THE MINUTES OF THE EXTRAORDINARY BOARD OF DIRECTORS MEETINGOn February 9, 2021, at 12:30 pm, met, by videoconference, Messrs. José Maurício Pereira Coelho – Presidente, Fernando Jorge Buso Gomes – Vice-Presidente, Eduardo de Oliveira Rodrigues Filho, Isabella Saboya de Albuquerque, José Luciano Duarte Penido, Marcel Juviniano Barros, Marcelo Gasparino da Silva, Murilo Cesar Lemos dos Santos Passos, Oscar Augusto de Camargo Filho, Roger Allan Downey, Sandra Maria Guerra de Azevedo, Toshiya Asahi, Iran da Cunha Santos. Mr. Luiz Gustavo Gouvêa was present as Governance Secretary of Vale. Thus, the Board of Directors unanimously approved the following: “CANCELLATION OF THE EXTRAORDINARY GENERAL MEETING (“EGM”) OF 03.01.2020 AND CALL OF NOTICE OF ANOTHER EGM – AMENDMENTS TO THE BYLAWS. Mr. José Maurício Coelho, Chairman of the Board of Directors, explained the need to separate the proposed amendments to the bylaws originally approved by the Board of Directors on 01/28/2021 by subject, without changing the essence of the original proposal, in order to provide greater comfort for shareholders to discuss and deliberate on the issues on the agenda at the Extraordinary General Meeting. Then, Mr. Luiz Gustavo Gouvea, Secretary of Corporate Governance, presented the revised table with proposed amendments to the Bylaws and the Absentee Ballot (“BVD”). The Board of Directors, after the properly discussions, (i) canceled the call for the Extraordinary General Meeting, which would be held on March 1, 2021; and (ii) approved the new call for the Extraordinary General Meeting to be held on March 12, 2021, pursuant to Art. 14, item XV of the Company's Bylaws, maintaining the same agenda, however with the following changes in relation to the original proposal of 01/28/2021: (ii.a) division of the agenda and the BVD into thematic items to be voted separately by the shareholders; (ii.b) exclusion of the final part of the proposal for item IV of §10 of Article 11, in order to dismember the proposals for individual voting and vote counting, as well as adjustment in the wording of the justification contained in the table of proposed amendments to the Bylaws; (ii.c) dismemberment of the end of the new paragraph 5 of Art. 11 and its consolidation in the new paragraph 6 of Art. 11, including the clarification that the Lead Independent Director will not have an individual decision-making role, and the consequent adjustment in the wording the justification of the table of proposed amendments to the Bylaws; (ii.d) clarification of the wording of §7 of Article 11, with respect to the appointment by the Chairman of the Board of Directors to represent the collegiate body externally; and (ii.e) amendment to the new paragraph 5 of Article 11, to make it clear that the election of the Chairman and Vice-Charmain will be made individually by the General Meeting.” The manifestation of dissenting vote about the amendments to items V and VI of §10, of Article 11, presented by the Director Marcelo Gasparino da Silva, pursuant to Exhibit I to these minutes, is hereby consigned.” I hereby attest that the item above reflects the decision taken by the Board of Directors.Rio de Janeiro, February 9, 2021. Luiz Gustavo Gouvêa Secretary 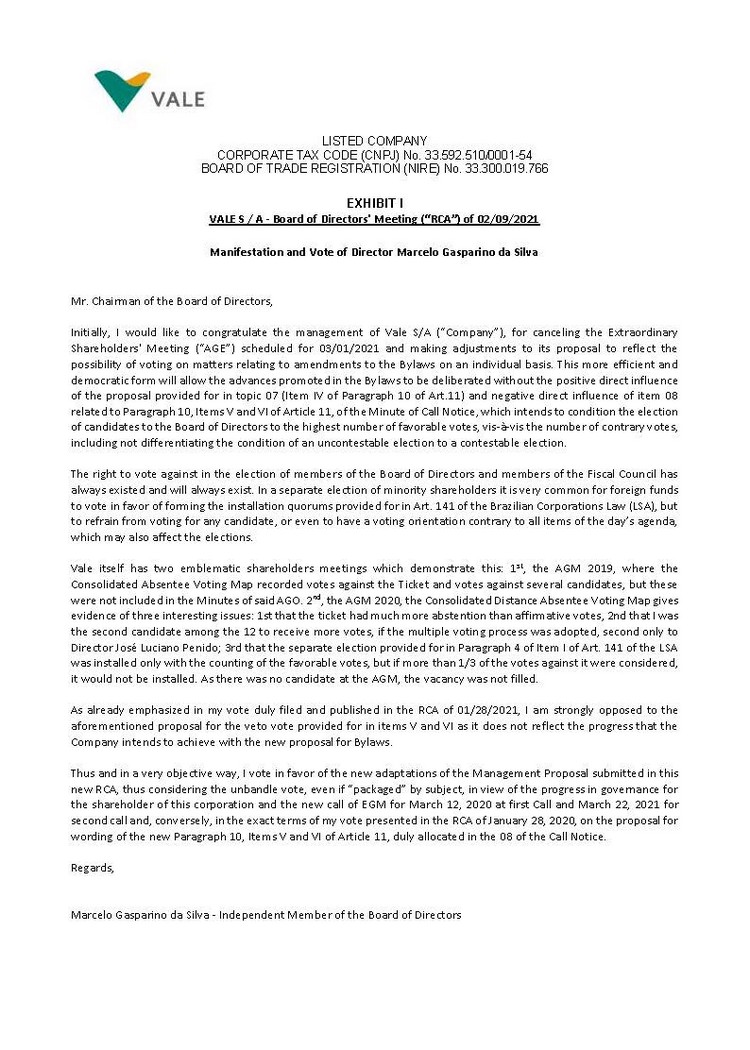 LISTED COMPANY CORPORATE TAX CODE (CNPJ) No. 33.592.510/0001-54 BOARD OF TRADE REGISTRATION (NIRE) No. 33.300.019.766EXHIBIT I VALE S / A - Board of Directors' Meeting (“RCA”) of 02/09/2021Manifestation and Vote of Director Marcelo Gasparino da SilvaMr. Chairman of the Board of Directors,Initially, I would like to congratulate the management of Vale S/A (“Company”), for canceling the Extraordinary Shareholders' Meeting (“AGE”) scheduled for 03/01/2021 and making adjustments to its proposal to reflect the possibility of voting on matters relating to amendments to the Bylaws on an individual basis. This more efficient and democratic form will allow the advances promoted in the Bylaws to be deliberated without the positive direct influence of the proposal provided for in topic 07 (Item IV of Paragraph 10 of Art.11) and negative direct influence of item 08 related to Paragraph 10, Items V and VI of Article 11, of the Minute of Call Notice, which intends to condition the election of candidates to the Board of Directors to the highest number of favorable votes, vis-à-vis the number of contrary votes, including not differentiating the condition of an uncontestable election to a contestable election.The right to vote against in the election of members of the Board of Directors and members of the Fiscal Council has always existed and will always exist. In a separate election of minority shareholders it is very common for foreign funds to vote in favor of forming the installation quorums provided for in Art. 141 of the Brazilian Corporations Law (LSA), but to refrain from voting for any candidate, or even to have a voting orientation contrary to all items of the day’s agenda, which may also affect the elections.Vale itself has two emblematic shareholders meetings which demonstrate this: 1ˢᵗ, the AGM 2019, where the Consolidated Absentee Voting Map recorded votes against the Ticket and votes against several candidates, but these were not included in the Minutes of said AGO. 2ⁿᵈ, the AGM 2020, the Consolidated Distance Absentee Voting Map gives evidence of three interesting issues: 1st that the ticket had much more abstention than affirmative votes, 2nd that I was the second candidate among the 12 to receive more votes, if the multiple voting process was adopted, second only to Director José Luciano Penido; 3rd that the separate election provided for in Paragraph 4 of Item I of Art. 141 of the LSA was installed only with the counting of the favorable votes, but if more than 1/3 of the votes against it were considered, it would not be installed. As there was no candidate at the AGM, the vacancy was not filled.As already emphasized in my vote duly filed and published in the RCA of 01/28/2021, I am strongly opposed to the aforementioned proposal for the veto vote provided for in items V and VI as it does not reflect the progress that the Company intends to achieve with the new proposal for Bylaws.Thus and in a very objective way, I vote in favor of the new adaptations of the Management Proposal submitted in this new RCA, thus considering the unbandle vote, even if “packaged” by subject, in view of the progress in governance for the shareholder of this corporation and the new call of EGM for March 12, 2020 at first Call and March 22, 2021 for second call and, conversely, in the exact terms of my vote presented in the RCA of January 28, 2020, on the proposal for wording of the new Paragraph 10, Items V and VI of Article 11, duly allocated in the 08 of the Call Notice.Regards,Marcelo Gasparino da Silva - Independent Member of the Board of Directors