For the month of

(Indicate by check mark whether the registrant by furnishing the information contained in this Form is also thereby furnishing information to the Commission pursuant to Rule 12g3-2(b) under the Securities Exchange Act of 1934.)

(If “Yes” is marked, indicate below the file number assigned to the registrant in connection with Rule 12g3-2(b). 82- .) 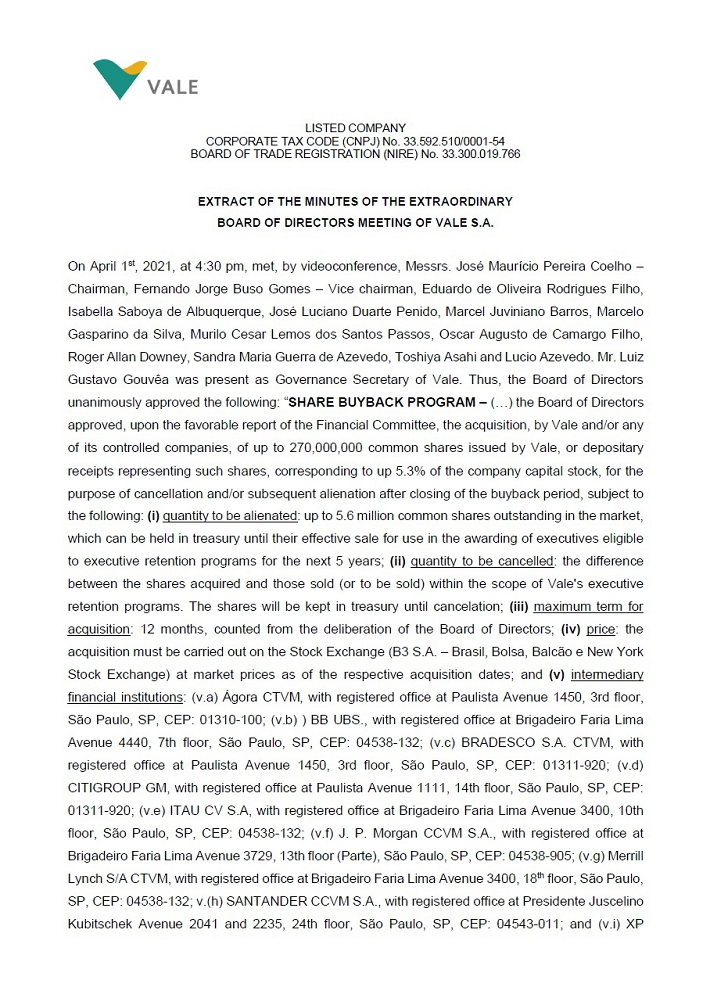 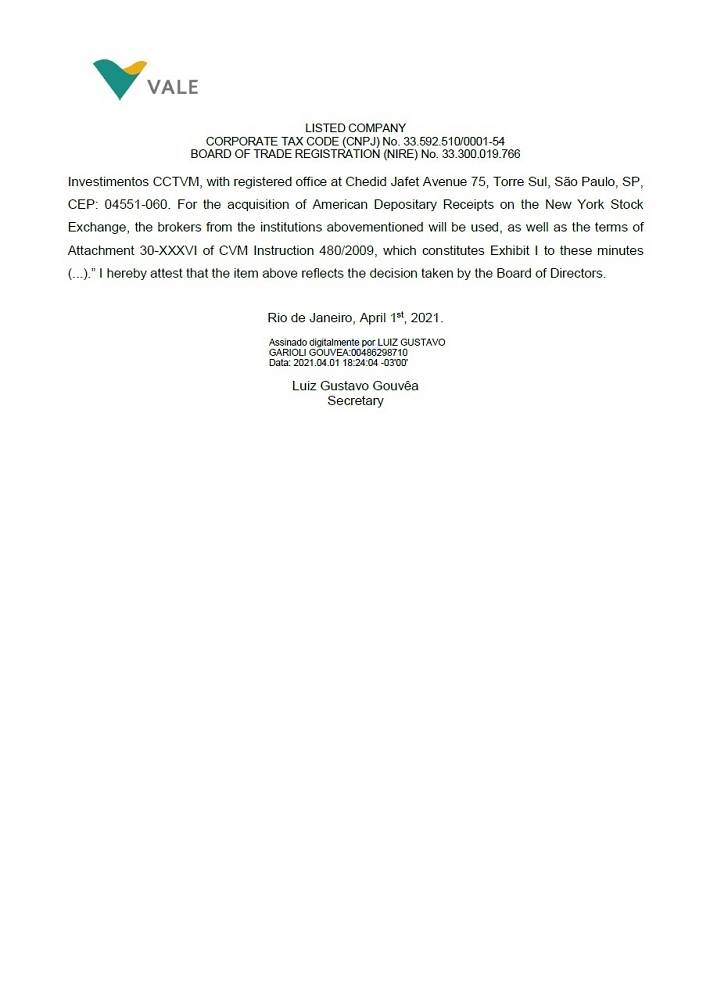 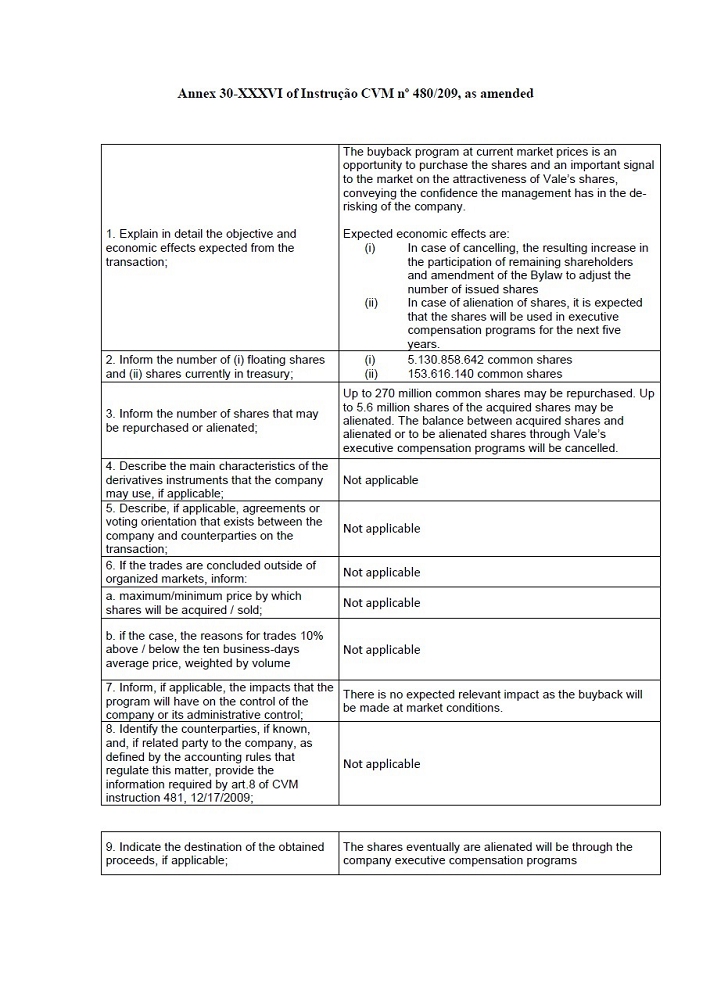 Annex 30-XXXVI of Instrução CVM nᵒ 480/209, as amendedThe buyback program at current market prices is an opportunity to purchase the shares and an important signal to the market on the attractiveness of Vale’s shares, conveying the confidence the management has in the de- risking of the company.1. Explain in detail the objective and economic effects expected from the transaction;2. Inform the number of (i) floating shares and (ii) shares currently in treasury;3. Inform the number of shares that may be repurchased or alienated;4. Describe the main characteristics of the derivatives instruments that the company may use, if applicable; 5. Describe, if applicable, agreements or voting orientation that exists between the company and counterparties on the transaction; 6. If the trades are concluded outside of organized markets, inform: a. maximum/minimum price by which shares will be acquired / sold;b. if the case, the reasons for trades 10% above / below the ten business-days average price, weighted by volume 7. Inform, if applicable, the impacts that the program will have on the control of the company or its administrative control; 8. Identify the counterparties, if known, and, if related party to the company, as defined by the accounting rules that regulate this matter, provide the information required by art.8 of CVM instruction 481, 12/17/2009;Expected economic effects are: (i) In case of cancelling, the resulting increase in the participation of remaining shareholders and amendment of the Bylaw to adjust the number of issued shares (ii) In case of alienation of shares, it is expected that the shares will be used in executive compensation programs for the next five years. (i) 5.130.858.642 common shares (ii) 153.616.140 common shares Up to 270 million common shares may be repurchased. Up to 5.6 million shares of the acquired shares may be alienated. The balance between acquired shares and alienated or to be alienated shares through Vale’s executive compensation programs will be cancelled.Not applicableNot applicableNot applicable Not applicableNot applicableThere is no expected relevant impact as the buyback will be made at market conditions.Not applicable9. Indicate the destination of the obtained proceeds, if applicable;The shares eventually are alienated will be through the company executive compensation programs 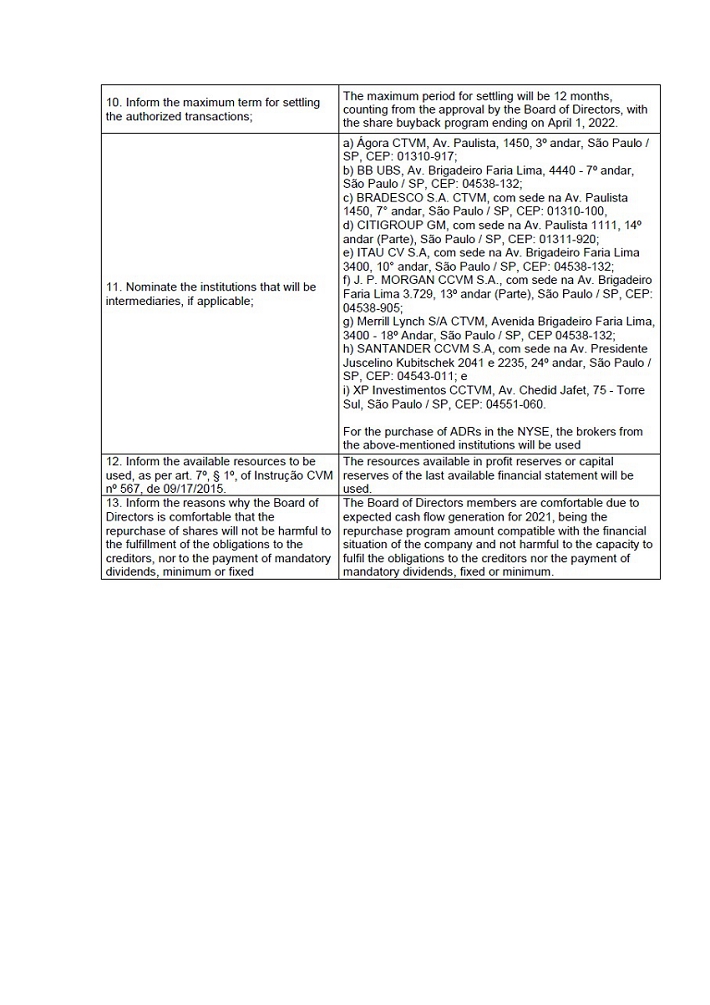