Coeur d’Alene, Idaho – April 1, 2021 – Timberline Resources Corporation (OTCQB: TLRS; TSX-V: TBR) (“Timberline” or the “Company”) announces exploration plans for the 2021 field season at its 100%-controlled Eureka Project in Nevada. The plans are built upon historic work and results from the 2020 program that improved understanding of district and local controls on high grade (≥ 3 g/t) gold. The plan for 2021 features approximately 6,000 meters of drilling, 20 line-kilometers of Controlled-Source Audio Magnetotellurics (CSAMT), and 30 line-kilometers of IP/Resistivity (IP) along with geologic mapping and 3D modeling. The Lookout Mountain resource will be tested for expansion in three areas having drill holes with intercepts of high-grade Carlin-type (CT) gold. Drilling is also being considered on the Company’s patented claims at the historic Windfall Mine where previous drilling intercepted high-grade gold. The Oswego Target will be advanced to follow-up on historic surface sampling, which included 85.7m @ 12.38 g/t gold in outcrop (see Company news release dated June 12, 2018 at http://timberlineresources.co/press-releases).

“We have significantly advanced our understanding of the higher-grade gold at Eureka. In 2020, we saw the interplay of favorable host rocks with structure and collapse breccias, yielding near-surface high-grade, oxide gold in drilling. Last year’s geophysics and drilling identified several key structures, which we are now developing into prime targets for more drilling”, commented Patrick Highsmith, Timberline’s President and CEO. “We are planning for a very significant exploration program in 2021, focusing on high-value targets that build on the higher-grade portions of the Lookout Mountain Resource.”

The 2020 district exploration program included geologic modeling, geophysics (IP and gravity), and a drill program that advanced several exploration targets along the Lookout Mountain Trend, the Windfall Trend, and the Oswego Target (Figure 1). However, drilling in 2020 was limited to the area around the historic Lookout Mountain Open Pit and eastward step-outs.

High grade gold is present along the Lookout Mountain trend in stratigraphic and structural settings known to host significant CT gold mineralization elsewhere in the Battle Mountain-Eureka Trend (Figure 2). The resource around the historic Lookout Mountain Open Pit has been the focus for most of the drilling dating back almost 20 years. This is largely due to the significant near-surface high-grade gold that has been documented in and around the pit, such as the 15.24m of 10.09 g/t oxide gold reported by Timberline in December 2020.

Additionally, drilling has documented a much larger footprint of mineralization that extends two kilometers to the north and nearly four kilometers to the south of the Lookout Pit, while also covering at least one kilometer in an east-west direction. The 2020 drill program probed eastward into the Graben Zone from the resource area (Figure 2). Historic drilling and geophysics suggested the presence of important structures and alteration at depth. A strong IP anomaly was reported in February 2021, the periphery of which was documented by 2020 core drilling to host abundant pyritic and carbonaceous breccia containing anomalous gold, silver, lead, and zinc (see

Gold is concentrated along moderate to steeply dipping faults and along contacts within the Cambrian and Silurian-Devonian age stratigraphy (Figure 2). Clustered, high grade intercepts with nearby long intercepts of ≥1 g/t oxide gold (Table 1) occur at the Water Well - North Lookout, South Lookout, and Rocky Canyon Zones (Figures 1 and 3). Isolated, higher grade drill intervals are present throughout the Lookout Mountain Trend, including the more advanced South Adit Zone. These areas are all inadequately drilled. 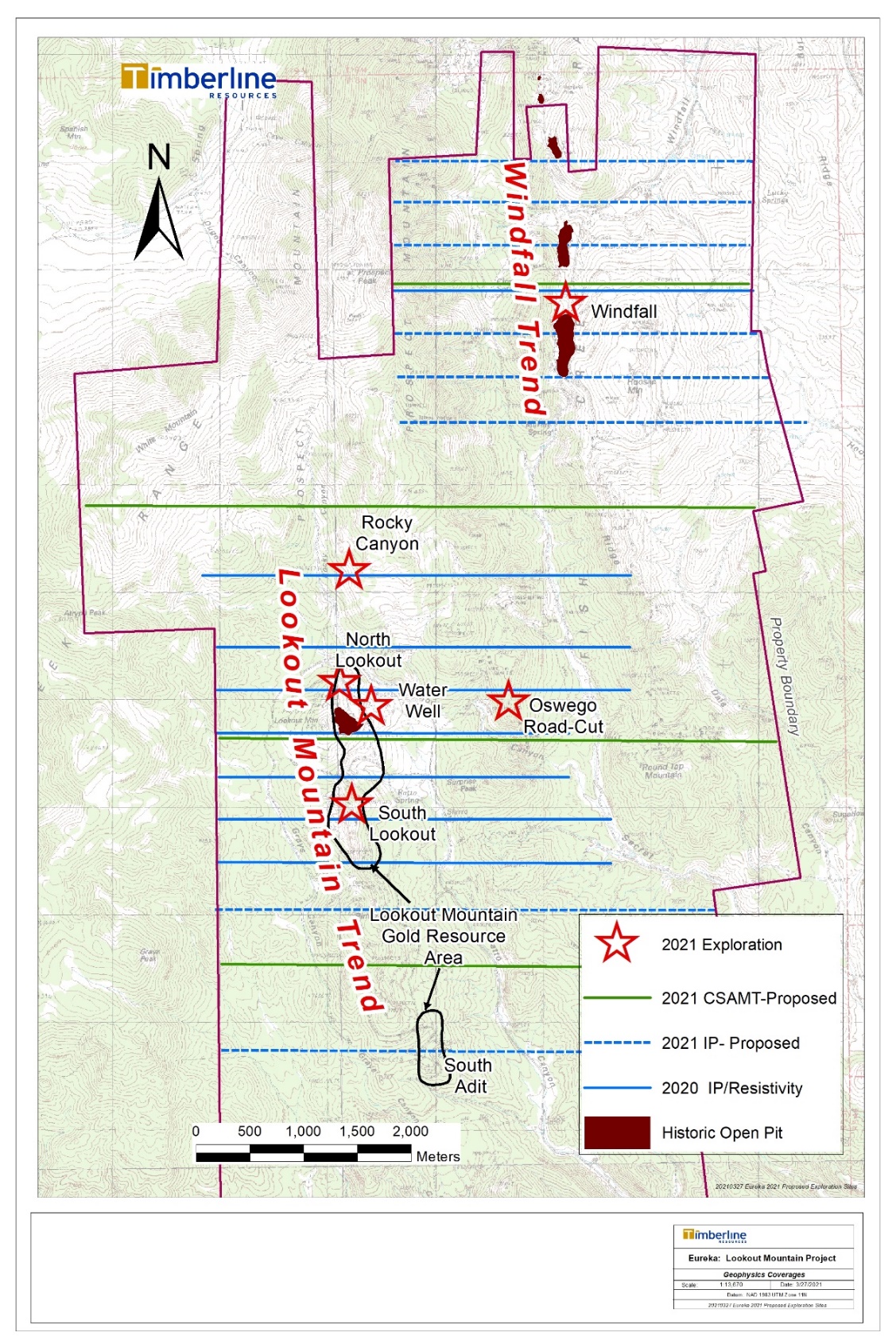 * Timberline cautions that similar geology to an active or past-producing mine does not indicate that mineralization will occur on Timberline’s property, and if present, that it will occur in sufficient quantity or grade that would be economic to mine. 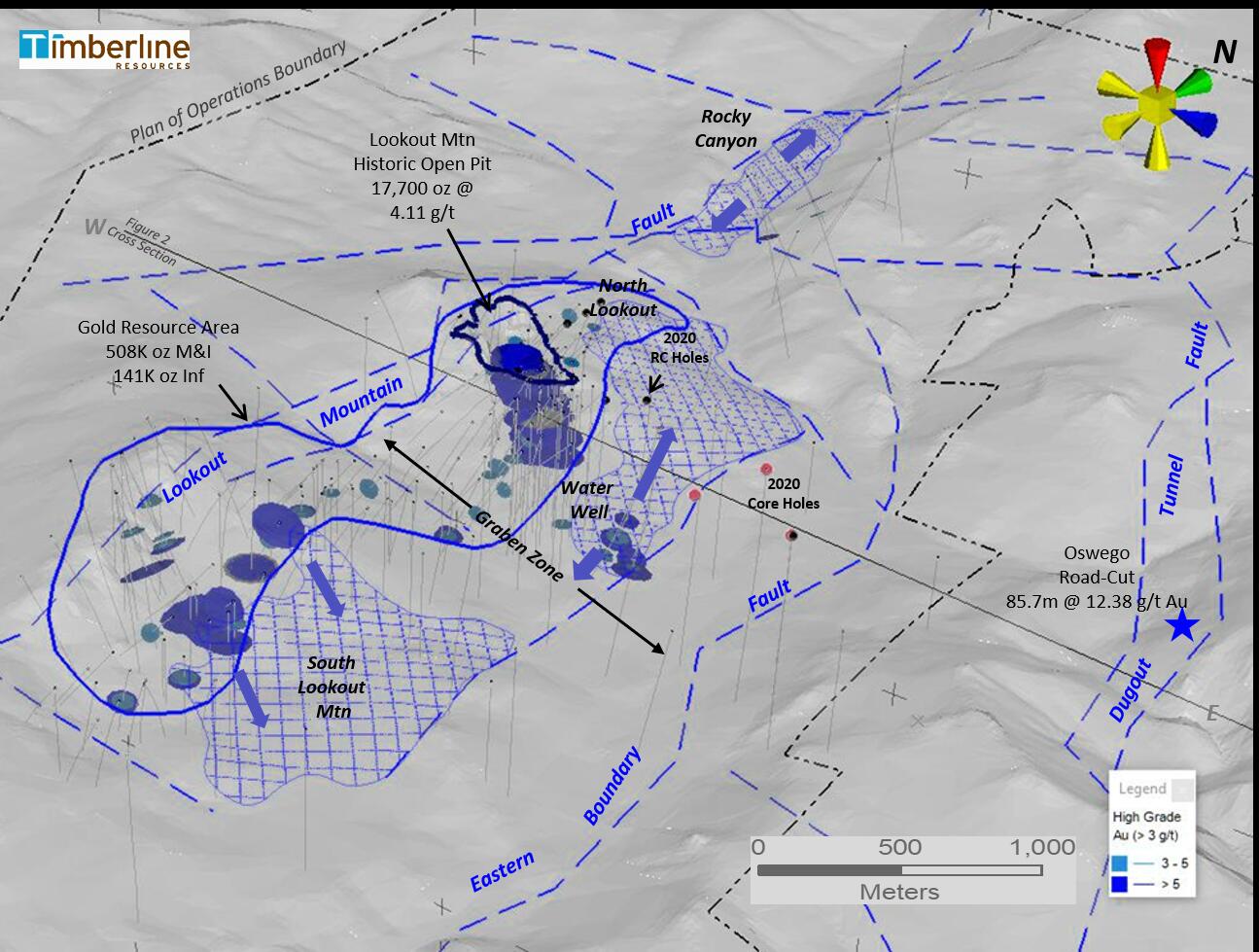 The Windfall Trend (historic production of 114,000 ounces Au) has seen less modern exploration than the Lookout Mountain Trend. During 2020 and early 2021, Timberline increased its efforts to compile historic drilling data, geologic mapping, and geophysics at Windfall. The team also conducted limited geologic mapping around the historic pits and along trend (Figure 4). A single IP test line surveyed in 2020 also focused attention on the target’s potential. The historically mined mineralization and existing drill intercepts at Windfall occur in a closely analogous stratigraphic and structural setting to the Lookout Mountain Deposit.

Gold mineralization is found within the Dunderberg Formation and underlying Hamburg Dolomite. The highest-grade mineralization (see Company news release dated July 10, 2018 at http://timberlineresources.co/press-releases) occurs at or near the contact between these two formations, often associated with cross structures. Intense gold mineralization is linked to strong and pervasive carbonate dissolution zones in the Hamburg Dolomite and collapse brecciation in the overlying Dunderberg Formation. High-grade gold is associated with pyrite, orpiment and realgar, but it can be oxidized to considerable depth. Outside of the historic pits, this contact is poorly tested by drilling between the pits and along the trend.

There are Timberline and other modern drill intercepts between the various pits that include intervals of oxide gold mineralization higher than 3.0 g/t or long runs of more than 1.0 g/t (Table 2). An active program of historic drill hole re-logging is currently underway to support surface geological mapping and geophysics campaigns across this target area during the second and third quarters of 2021. 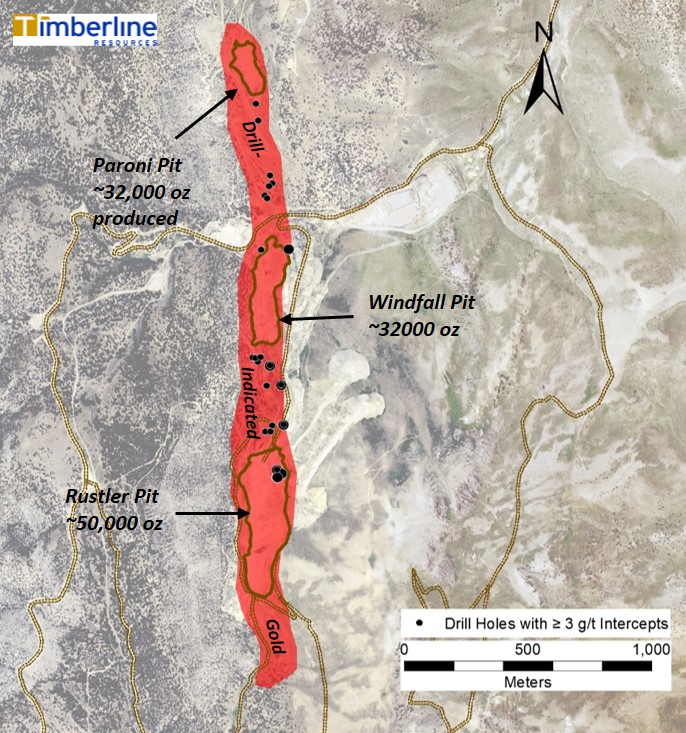 Timberline remains focused on high-value exploration to demonstrate the multi-million-ounce potential of the Eureka Project. The results from the 2020 exploration program confirm that the Lookout Mountain Trend remains target-rich for gold discovery. Untested targets include faults newly recognized as potential feeders, multiple sections of favorable stratigraphy documented to host CT gold in the district and across Nevada, deeper geophysical anomalies, and high-grade surface gold occurrences such as at the Oswego road-cut (Figures 2 and 3).

Approximately 6,000 m of reverse circulation (RC) and core drilling is anticipated to begin in the second quarter of 2021. The team aims to increase the ratio of core to RC drilling in order to improve the geological record in key areas. Drilling will be prioritized on the high-grade target areas discussed in this release, including the Water Well-North Lookout, South Lookout, and Rocky Canyon Zones (Figure 3).

Cautionary Statement: Historic Windfall drill data have been compiled and reviewed including drill logs, laboratory assay certificates, and location maps with regard to their location relative to recent (2008-2015) drill data. Drill sites have been identified and confirmed through field review. A Qualified Person has not done sufficient work to classify the historical information as a current mineral resource, and the Company is not treating the historical information as a current mineral resource. Additional drilling and analysis will be required to verify the historical information or create a current mineral resource. (see Company news releases dated April 20, 2015 and August 8, 2018 at http://timberlineresources.co/press-releases for additional details on Windfall mineralization).

Geophysical contractors are scheduled during the second quarter to initiate significant CSAMT and IP geophysical surveys along the Lookout and Windfall Trends (Figure 1). The geophysics will be integrated with new geological mapping, sampling, and 3D analysis to prioritize and select drill targets.

The database supporting the mineral resource at Lookout Mountain has been boosted markedly by the 2020 drilling and careful geological logging and modeling. The Timberline technical team will be working internally and with its qualified persons to assess the impact of the 2020 and 2021 programs on the current gold resource. An update to the resource is likely before the end of calendar year 2021.

Steven Osterberg, Ph.D., P.G., Timberline’s Vice President Exploration, is a Qualified Person as defined by National Instrument 43-101 and has reviewed and approved the technical contents of this release. Dr. Osterberg is not independent of the Company as he is an officer and a director.

Timberline Resources Corporation is focused on delivering high-grade Carlin-Type gold discoveries at its district-scale Eureka Project in Nevada. The Eureka Property includes the historic Lookout Mountain and Windfall mines in a total property position of approximately 24 square miles (62 square kilometers). The Lookout Mountain Resource was reported in compliance with Canadian NI 43-101 in an Updated Technical Report on the Lookout Mountain Project by Mine Development Associates, Effective March 1, 2013, filed on SEDAR April 12, 2013.

The Company is also operator of the Paiute Joint Venture Project with Nevada Gold Mines in the Battle Mountain District. These properties all lie on the prolific Battle Mountain-Eureka gold trend. Timberline also controls the Seven Troughs Project in northern Nevada, which is one of the state's highest-grade former gold producers. Timberline controls over 43 square miles (111 square kilometers) of mineral rights in Nevada. Detailed maps and mineral resources estimates for the Eureka Project and NI 43-101 technical reports for its projects may be viewed at http://timberlineresources.co/.

On behalf of the Board of Directors,